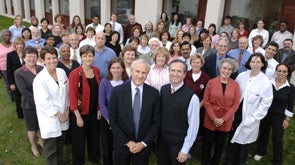 Framingham Study is a population-based, observational cohort study that was initiated by the United States Public Health Service in 1948 to prospectively investigate the epidemiology and risk factors for cardiovascular disease. It has grown into an ongoing, longitudinal study gathering prospective data on a wide variety of biological and lifestyle risk factors and on cardiovascular, neurological and other types of disease outcomes across 3 generations of participants. While initially focused on the clinical assessment of risk factors and disease, the study has evolved, incorporating advances in medical science (newer diagnostic criteria, biomarker assays and imaging technologies) as these became available. Extensive genotyping data is available on over 60% of all participants (including over 90% of persons attending examinations after 1990) and samples of sera and plasma from successive exams have been stored for future studies.

The Study began in 1948-50 with the recruitment of the Original cohort (5209 participants; 2,873 women, 2,336 men; age 28-62 years, mean age 45 years) comprising two-thirds of the adult population then residing in the town of Framingham, MA. These persons have been evaluated biennially and are currently undergoing the 29th biennial examination. In 1971, children of the Original cohort members and their spouses were assembled into the Offspring cohort (5124 persons, 2,641 women, 2,483 men; age 5-70 years, mean age 37 years; 3514 biological offspring). Members of this cohort have been reassessed 7 times. Starting in 2002, a third generation has been recruited and this Gen 3 cohort comprises 4095 individuals (2183 women, 1912 men; mean age 40 years) who have undergone an initial examination. At each study examination participants are evaluated with medical histories, physician examinations, laboratory tests for vascular risk factors, and at some examinations with cognitive test batteries and brain imaging.

The Framingham Study has assembled a dense and complex database over the past 50+ years. These data include