Eating healthy, especially during the holidays can be difficult for even the healthiest eater. The holidays may not be a time to lose weight, but you can maintain your weight and not gain the typical five to 10 pounds that's common around this time of year.

Here to offer some tips and recipes to help you navigate the holiday season in a healthy way is Tracey Burg. She is the Culinary/Nutrition Manager at Boston Medical Center's Nutrition Resource Center, Food Demonstration Kitchen and Preventive Food Pantry. She is a registered dietitian, former chef, and graduate of the Culinary Institute of America. 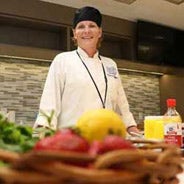 Tracey Burg is the Culinary/Nutrition Manager at Boston Medical Center's Nutrition Resource Center, Food Demonstration Kitchen and Preventive Food Pantry. She is a registered dietitian, former chef, and graduate of the Culinary Institute of America. At BMC she develops curriculum and presents culinary classes for various patient groups and staff to increase knowledge of healthy cooking techniques and promote nutritional and behavioral changes for improved health. During her tenure at BMC, the NRC has been featured on numerous television and news outlets and has received several awards.

For the past 20 years, Tracey has been a Culinary Instructor/Educator for school foodservice programs in Massachusetts and around the country where she teaches culinary skills to school food service workers. She currently works with the John C. Stalker Institute of Nutrition and Dietetics at Framingham State University and the USDA’s Institute for Child Nutrition at the University of Mississippi.

Melanie Cole (Host): The holidays are an especially difficult time to watch your eating and try and lose weight. That doesn’t mean, however, that you should throw out all your good intentions and eat whatever you want. There are some simple ways to eat healthy over the holidays and enjoy your special time with family and friends. Here to offer some tips and recipes to help you navigate the holiday season in a healthy way, is Tracey Burg. She is a registered dietician and the Culinary Nutrition Manager at Boston Medical Center’s Nutrition Resource Center, food demonstration kitchen and preventive food pantry. Welcome to the show Tracey. So, the holidays are a tough time for people watching what they eat and eating healthy. There is so much stuff around. How do you recommend planning in advance for all of those temptations?

Tracey Burg, RD, LDN (Guest): Well, yeah, so, when we are talking about eating over the holidays, everybody kind of thinks oh, oh, I gotta be on my guard and I want people to think about just kind of making healthy choices. You can have the food that might be considered like on a fattening sort of realm like say cheesecake and that kind of thing. But we are talking about having small portions. I always say, all foods can fit and when we are talking about eating especially away or at people’s homes, one thing, you don’t want to offend people, I can’t eat that. But you can eat things that might not in a large portion might be unhealthy, back to the cheesecake; but in a slice or a sliver, and you savor that piece and eat it slowly, you can have those foods as well.

Melanie: So, we can have them. People do not always understand that, but should you plan? Should you think about what might be there or should you eat before you go to a party? Are you someone that recommends doing that

Tracey: Yeah okay, good points right there. So, I suggest before you go to a party or before Thanksgiving; you want to have something to eat, something healthy to eat before you walk out the door. That way, you are not going in there starving and when you see a whole plethora of food in front of you, you are not just grabbing at everything and filling up your plate. You have already had something in your stomach. You don’t want to skip meals, so on a day that like you might be having a late afternoon meal; have breakfast. Have a nice healthy breakfast with some good fiber in there, maybe some oatmeal or some eggs with whole wheat toast, something like that, but don’t skip meals. Because when you are skipping meals, you are going to start off again, landing at the person’s doorstep hungry and then your stomach just kind of takes over and you might make food choices that are not that healthy.

Another thing you mentioned too, is when you are going to someone’s house, are there ways that you can kind of alleviate those temptations and one of them is, you bring the food. You bring the healthy food. You bring something like a crudités, fruits and vegetables and maybe a dip. We make a delicious dip with just vanilla Greek yogurt and a little peanut butter, whip it together, tastes delicious, low in fat, high in protein and then you have got all those wonderful vegetables to kind of fill you up fiber-wise. That’s the way to go, I suggest bringing something healthy that you are going to share with everybody and you know that you have something that you can eat while you are there.

Melanie: So, there is something that reduces our inhibitions to those temptations and that is alcohol which also can be a dessert in itself. With some of the mixers, it can add so many calories to whatever it is our good intentions were. So, what do you want people to know about alcohol during the holidays?

Tracey: Well, if you choose to have an alcoholic beverage while you are at somebody’s house, just try to make sure that you limit the amounts of drinks that you have. You know the standard is like a 12 ounce of beer or a five-ounce glass of wine which is not too much or an ounce of alcohol. So, try to keep your drinks limited. Try to be drinking water in between, or you could have like a diet soda if you wanted something like that. Try to stay away from like the punches and the mixed drinks because they are often loaded with a lot of extra calories, mostly sugar, so anybody that may be diabetic, you might want to watch out for that. Watch out for the eggnog. My husband is an eggnog fanatic. Loves his eggnog. But those kinds of drinks you want to have kind of few or far between. Enjoy them, but just have a small amount. And again, stretch those out throughout the day and make sure you are eating too because if you are not eating food along with the alcohol; you might tend to drink more. So, try to spread it out throughout the day, include food and try to watch out for too many of those sweeter, higher caloric drinks.

Melanie: So, so much of what we see at the holidays if pretty fattening, and many carbohydrates, pretty high in calories. Give us some of your chef tips for sweet potatoes and mashed potatoes you know anything, gravies, ways that we can make these things just a little bit lower in calories so they are not quite as damaging.

Tracey: If you want to set yourself up for success, when we are talking about the foods that you are making and the foods that you are tasting; one thing I always suggest is following My Plate. Many people, most people are familiar with the My Plate emblem now so the idea is half your plate should be fruits or vegetables, one quarter protein, one quarter grains and they should be whole grains. So, if you are filling up your plate, whether it is your appetizer plate or your dinner plate; keep that in mind. Watch out for too many of the starchy vegetables like your sweet potatoes and your mashed potatoes and your dressings, your stuffing, and breads. Have them but in smaller amounts, maybe a couple of tablespoons of each, but load up more on the vegetables like your green beans and your carrots, ones that are lower in calories and like carrots are higher in fiber too. And when you are thinking about making the food, so watch out for grandma’s recipe of mashed potatoes, throwing in a stick of butter and a cup of heavy cream and make small changes to that. So, instead of using the heavy cream; use 1% milk. Instead of using a stick of butter use a tablespoon or two. So, you can still have those flavors, but you don’t need to have them overly indulgent and really high in calories.

Melanie: And now, talking about desserts and you mentioned the cheesecake before, because desserts are where we can do some of the biggest damage. And we used to hear when Oprah was doing all of these things about adding applesauce instead of the oil, give us some of your best tips for making those desserts if we are going to bring one to a party that we are going to. What can we do to make them just a little bit healthier?

Tracey: Okay, so, for dessert, so what I usually suggest is instead of having a giant table filled with different pies and crumbles and cakes and cookies. Try sitting everybody down for an individual plate of dessert. So maybe an hour or two after the big meal, you sit down and you have something simple and something say like a pumpkin mousse and instead of topping it with whipped cream or ice cream, think about using like vanilla Greek yogurt. That’s what we use instead of using whipped cream or something in any dessert. That vanilla Greek tastes good, it’s smooth and creamy and you are not going to be getting all those extra sugar calories. And also try making fruit-based desserts too, so maybe an apple crisp or something like that. Something with some fiber in it and using like a whole grain oatmeal or something like that crisp piece on top and that also kind of gives you a little bit of a healthier type of dessert than going with something like as you said cheesecake or some kind of a high-calorie cake.

Melanie: Those are great ideas. Great tips about the individual desserts because that does certainly limit it rather than putting the big cake in front of everybody. Now, what about keeping a food diary, journaling and or weighing yourself during the holidays? As a dietician, do you recommend we stay away from the scale during the holidays or we look at it?

Tracey: I would suggest that as we have been saying all along, make healthy food choices for the most part along the way, watch out for eating out of the bag or big bowls of different snacks and things like that, try to give yourself a portion and stick to that. And have fun. Make sure you are following that My Plate, eating half your plate fruits and vegetables, the grains and the proteins and if you are basically following those tenets then you are going to do well.