At age 82, Eleanor Gray resides alone at home. She has neighbors and she says that they all look after one another. One day in December 2020, her neighbor had called Eleanor and she did not answer. Her neighbor looked in Eleanor’s window and found Eleanor down on the floor. Moving quickly, the neighbor called 911 and an ambulance arrived. A maintenance worker from where Eleanor resides went with her to the hospital so that she did not have to face the ambulance ride alone.

Ms. Gray was found to have a clot in the right side of one of the most important vessels in her brain- causing a stroke. This left her with left sided weakness, difficulty speaking, and a NIHSS of 11. Here at Boston Medical Center, Dr. Nguyen removed the clot in her brain by endovascular intervention. Ms. Gray recovered tremendously after her stroke. She went from a NIHSS of 11 to 3. She was living at home independently and was able to perform almost all of her activities of daily living on her own.

During her clot removal, Eleanor was also found to have another problem within her brain- a dural arteriovenous fistula (dAVF). A dAVF is an abnormal connection between the arteries and veins in the covering of the brain.

Dr. Nguyen and Dr. Abdalkader later worked together to disconnect the fistula (pictured below) via endovascular embolization. Ms. Gray is doing well after the procedure and is continuing to enjoy living life independently. 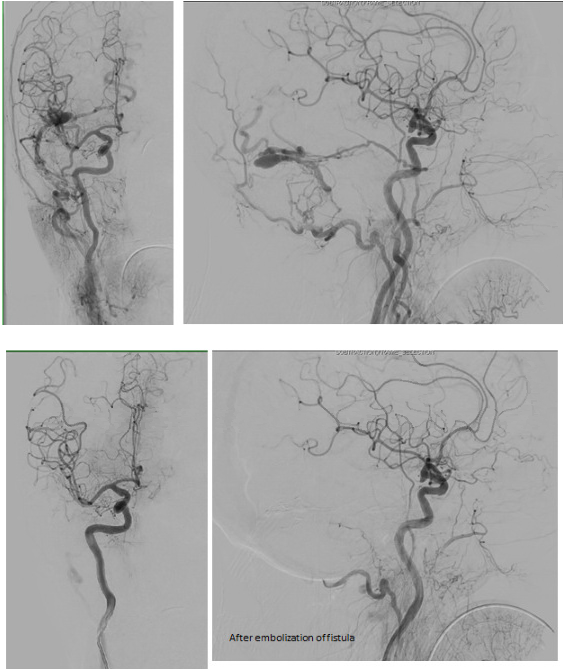