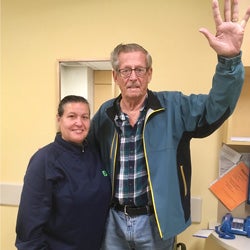 Mr. Kavka was laying on his couch one day when he stood up and fell to the floor. His wife rushed over. He was disoriented and his mouth was sideways. He was trying to walk, but kept walking into the wall. He was weak on the left side. His wife immediately called 911 suspecting a stroke. EMS arrived, and it took four people to move him from the bathroom.

He was brought to Good Samaritan Medical Center Emergency Room where he was noted to have right gaze preference and left sided weakness. He was promptly diagnosed with an acute ischemic stroke by Dr. Rice. He was found to have a right middle cerebral artery occlusion, and was swiftly transferred to Boston Medical Center, direct to the angio suite.

If I ever have another stroke, and I hope I never do, this is the only place I would go to.

Upon arrival at BMC, he underwent mechanical thrombectomy or clot removal. Three passes were required after which complete vessel opening was achieved. Under the combined care of Dr. Hugo Aparicio, Dr. Thanh Nguyen, Dr. Alice Ma, and Dr. Charlene Ong he began to have an outstanding recovery. His symptoms were completely resolved when he was discharged from the hospital.

Mr. Kavka stated, "If I ever have another stroke, and I hope I never do, this is the only place I would go to."

"Bill, my nurse in the ICU, was awesome. He was with me for 2 to 3 days. He was fantastic"

Mrs. Kavka was as grateful, stating, "The doctors showed they care, that it is not just a job. Nobody was in a hurry to get away."