Arthritis of the Foot | Conditions We Treat | Boston Medical Center 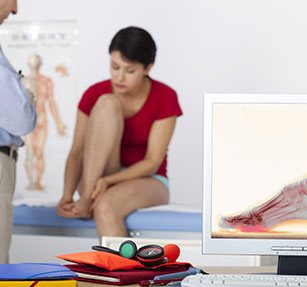 Arthritis of the Foot

Arthritis is inflammation and swelling of the cartilage and lining of the joints, generally accompanied by an increase in the fluid in the joints. Arthritis has multiple causes and is associated with many different illnesses. Symptoms include painful, swollen, and/or stiff joints. Arthritic feet can result in loss of mobility and independence, but early diagnosis and proper medical care can help significantly.

Some causes of arthritis include:

Because arthritis can affect the structure and function of the feet, it is important to see a podiatrist if any of the following symptoms occur in the feet:

Patient education and early diagnosis is important to effectively treat any form of arthritis. Damage of cartilage is not reversible, and if the inflammation of arthritic disease isn't treated, both cartilage and bone can be damaged, which makes the joints increasingly difficult to move.

Most forms of arthritis cannot be cured, but can be controlled or brought into remission. Arthritis may be treated in many ways. Physical therapy and exercise may be indicated, accompanied by medication. Aspirin is still the first-line drug of choice for most forms of arthritis. A treatment that works for one patient, may be almost no help at all to another. The control of foot functions with shoe inserts called orthotics, or with braces or specially prescribed shoes, may be recommended. Surgery is a last resort treatment option for arthritis, as it is with most disease conditions. Damaged joints can be replaced surgically with artificial joints.