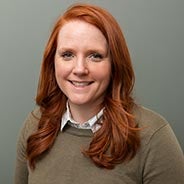 Kerry Pearl, CCC-SLP received her Master’s degree from Emerson College. She has worked as a Senior Speech Pathologist at Boston Children’s Hospital, an Early Intervention Program, and Children’s Speech & Feeding Therapy. She is regarded by some of the pioneering pediatric SLPs in the greater Boston area as a pediatric feeding expert. Kerry specializes in feeding therapy with children with sensory and/or oral motor based feeding difficulties. In previous experiences, Kerry has worked with diverse populations including premature infants with feeding and swallowing disorders, children with congenital cardiac disease, children with Trisomy 21, children with genetic and chromosomal disorders, autism spectrum disorder, and children with airway and esophageal abnormalities. She has presented as the lead clinician investigator on feeding difficulties at both the local and national level.

Learn more about the Pediatric Feeding and Swallowing Program

Melanie Cole (Host):  When you’re a new parent, you often don’t realize that children actually have to learn this process of eating. It’s not something that always comes naturally and certainly not to every child. So, here to tell us about feeding and swallowing disorders is my guest Kerry Pearl. She’s a pediatric speech and language pathologist at Boston Medical Center. Kerry as I was stating in my intro about feeding and swallowing and them not being always quite natural and something that always comes naturally by instinct; are feeding disorders and swallowing disorders, are they the same thing?

Kerry Pearl, CCC-SLP (Guest):  Thanks Melanie. They are actually very different. They are pretty complex processes and feeding involves chewing and how your body prepares the food to get ready to actually swallow it. There are a bunch of different factors that come into play with that including oral centric processing or how you taste the food.

Swallowing is when the brain takes over and we don’t have much control over that.

Host:  Okay so that’s a good distinction for us to start this episode on what problems do you see most often that affect swallowing and feeding? Are they pretty common?

Host:  So, picky eaters we will get to and how you work with them. But when parents are feeding and at the beginning, if they have trouble latching, maybe they call their lactation specialist or their pediatrician, but what are some signs in both babies and then as they get to be toddlers that there are some kinds of feeding or swallowing issues? Would we notice that as parents?

Kerry:  Sometimes you might. Infants that are coughing, choking or having any sort of increased congestion or wet breath sounds should definitely be evaluated by a pediatric speech language pathologist to see if maybe aspiration could be contributing to their feeding difficulty. Not all kids that are having trouble with aspiration cough or choke or show those more overt signs.

Host:  Wow, falling asleep, really? Because some kids do fall asleep especially babies when you are feeding them. And so choking is one of every parent’s biggest fears Kerry, it was certainly mine when my kids were little when you say about coughing or that heavy breathing. If we notice that and get freaked out; how do you diagnose what the disorder is?

Kerry:  We start with a clinical feeding evaluation which would be the clinician is watching a regular meal whether that’s a bottle feeding or foods that they would eat for lunch or dinner. If there’s any concerns for aspiration, we would do a modified barium swallow study which is an x-ray video as the child eats or drinks and it helps us assess whether any food or liquid can be going into their lungs when they are swallowing.

Host:  Well my daughter had one of those barium swallows to assess for reflux, so it really helps to diagnose that. Then what is therapy like especially with a baby or a little one? How do you help them to learn as it is to eat and to swallow?

As far as treatment goes; if the kid is aspirating, typically we will try altering the flow rate of the nipple. So, changing the nipple size that they use, or we may try putting them in different positions if they are a young infant. Other things that we can do is thicken their liquids to try to slow the liquid down to give them more time to close off their airway. And those have proven to be very effective interventions for managing aspiration.

Host:  How long do they take to work? How long would a parent notice a big difference? Maybe the child thriving, growing all of the things that we are supposed to see.

Kerry:  That’s a great question. Typically, it would depend on how long the problem was going on before the assessment and how severe the problem was. So, if it’s an older infant and it’s been going on for several months; it may take a little while longer to have the treatment make any meaningful change in bottle feeding or mealtimes in general.

Host:  Now we mentioned at the beginning about picky eaters and that’s a whole different ballgame Kerry. How do you work with kids that whether it’s texture or taste or look of it, that a two year old or a one year old that they just won’t eat the things that are put in front of them. What is a parent to do?

Kerry:  One of the most important things is checking in with the pediatrician to see if there’s anything else that could be going on that could be contributing to the feeding difficulty. For example, if a child has an undiagnosed allergy and continues to eat the food that they are intolerant to, it may result in picky eating. So, once a complete medical evaluation has been completed; we can use some strategies in feeding therapy to help expand the kid’s diet.

One of the big things that I recommend is consistent and repeated exposure to a nonpreferred food without forcing the child to interact with it. So, more turning it into a play-based interaction such as kissing the food, or licking it, doing some things silly that allows them to become more familiar with it without necessarily making it a stressful situation.

Host:  Yeah, that’s true and I know so many parents that have had to try that and what is therapy with you like? What is a typical session? How long do they last? Tell us a little bit about the sessions with you.

Kerry:  So, my sessions are anywhere from 30 to 45 minutes. We ask the parents to bring in both preferred and nonpreferred foods that they would like to work on. The child should be hungry for the feeding therapy session or the assessment so that they are interested in eating and willing to participate. And then we work on seeing where the kid is that day with the food so we might start with just kidding it and licking it and then working our way up gradually to taking bites depending on how they respond.

So, for some patients, that means they come in unwilling to look at or smell a food and they leave eating the food. For others, it’s a smaller change in that they are now willing to tolerate the food on their plate and smell it and then the next session we would work on building on from that. So, the overall rate of progress depends on again, the patient’s diagnosis, how long they’ve had the issue and their individual response to treatment.

Kerry:  That’s a good question. Usually when something like that happens, I again circle back with the pediatrician to see what changed. If something was working well especially for several months or even years and then all of the sudden, we have a step back in progress. I’d like to know what changed. And so if we can manage what’s changed, we can start to implement the strategies that had been working before.

So, sometimes starting a short term trial of feeding therapy again, can be helpful.

Host:  So, Kerry wrap it up for us. What would you like parents to know about feeding and swallowing disorders and what you can do for them at Boston Medical Center. Your best advice, really.

Kerry:  I would say to parents if you have a question or a concern about your child’s eating, swallowing, the variety that they eat, how mealtimes are going in general, if you’re stressed about it; it’s worth scheduling an evaluation just to see if there’s anything else that we could be doing. Sometimes after an evaluation, we’ll start feeding therapy or we may recommend additional testing. At other times it is just giving some strategies after a one time visit to adjust mealtimes to make them overall less stressful in general.

Host:  It’s so important and parents as I said in the intro, don’t always think that there’s feeding issue with their kids and that they have to actually really work on this sometimes. Thank you so much Kerry for coming on and telling us about feeding and swallowing disorders and the therapies that are available for worried parents. This is Boston MedTalks with Boston Medical Center. For more information, you can go to www.bmc.org, that’s www.bmc.org. This is Melanie Cole. Thanks for tuning in.