Barrett's Esophagus | Conditions We Treat | Boston Medical Center
BMC is seeing patients at our hospital and clinics—see how we’re keeping everyone safe. Book your next appointment today or learn about our telehealth options. 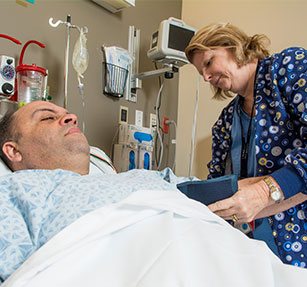 What is Barrett's Esophagus (BE)?

BE is estimated to occur in 2 – 5.6 % of people in the United States. BE is a known risk factor for precancerous dysplasia, which can then progress to esophageal adenocarcinoma (EAC). EAC develops in about 0.5% of people with BE annually. BE increase the risk of esophageal adenocarcinoma by 11-40 times when compared to patients without BE. When patients are diagnosed with BE, they are advised to enter a surveillance program of repeat endoscopies on a regular schedule to look for precancerous dysplastic changes or early esophageal cancer. The survival rate of all patients presenting with EAC is 15% at five years, but when EAC is diagnosed early, then cure is possible.

What are the Symptoms?

Typical symptoms of GERD include heartburn and regurgitation. BE occurs in about 10% of U.S. adults with heartburn. GERD however can be silent that is without heartburn or regurgitation, and BE can result in the absence of symptoms. In addition a loss of typical GERD symptoms like heartburn can be suggestive of the development of BE.

Barrett's esophagus patients may have symptoms of:

What are the Causes?

Barrett's esophagus is thought to be caused mainly by gastroesophageal reflux disease (GERD), which is persistent reflux occurring at least twice a week. Patients generally experience a feeling of heartburn or acid indigestion, and they may taste food or fluid in the back of the mouth. The use of over-the-counter or prescription acid-reducing drugs may decrease the risk of Barrett's esophagus.

How is Barrett's Esophagus Diagnosed?

Diagnosis is often difficult, because symptoms may be limited. The main diagnostic tool is upper endoscopy:

You will receive an intravenous sedative and pain medication. Once comfortable, the physician will then examine the area using an endoscope—a lighted tube with a small camera at the end. The physician will be able to view any abnormalities and take a tissue samples (biopsies) if necessary.

How is Barrett's Esophagus Treated?

Barrett's esophagus may be treated in a number of ways. These include:

The following lifestyle changes may be helpful in controlling reflux: