Center For The Urban Child and Healthy Family

School success is closely tied with positive outcomes for children. However, pediatricians may not have time or adequate training to advocate for Individualized Education Plans (IEPs) for children who might benefit or for plans with maximal supportive services to allow children to grow. Therefore, pediatrician Soukaina Adolphe, MD, who recently finished a mini-fellowship in Developmental and Behavioral Pediatrics, and attorney Ivys Fernández-Pastrana, JD, program manager of Family Navigation at Boston Medical Center, launched the Engagement and Access to Special Education (EASE) clinic. The EASE clinic, supported by the Center for the Urban Child and Healthy Family, and embedded in pediatric primary care, works closely with families, schools and primary care providers to support children's learning needs. 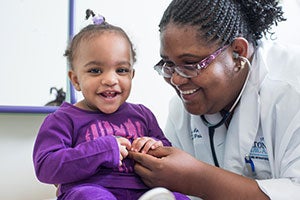 The clinic has served more than 100 families to date, including seven-year-old Denzil Lecky and his mother CP Lecky. Earlier this year, Ms. Lecky began to notice behaviors that were “out of the norm” for her son Denzil, who is diagnosed with Autism Spectrum Disorder (ASD). He was having a harder time in school, with transitions, dealing with crowds and in social atmospheres. Ms. Lecky decided to consult Denzil’s pediatrician who referred the family to the EASE clinic. In August of this year, Denzil had his first appointment with Adolphe.

During their initial visits, the EASE clinic noticed Denzil’s existing IEP did not include all of the services to which he was entitled, and the stated goals needed revisions. Adolphe coached Ms. Lecky on the specific resources for which she should ask the school system to provide. The EASE team helped Ms. Lecky review and understand Denzil’s IEP, liaising with the school’s Special Education Coordinator, and coaching Ms. Lecky to advocate on her son’s behalf. As a result, the school updated Denzil’s IEP with additional services, such as extended school days, to support his success. Ms. Lecky noted that through the EASE clinic, she learned to reframe her thinking and approaches to Denzil’s behaviors so she is better able to respond to and support him. When asked to reflect on her experience with the EASE clinic, Ms. Lecky said, “It has been rewarding. The EASE clinic has given me the voice to help advocate for me and my child.”

According to the EASE team, the experience of the Lecky family is common. Fernández-Pastrana sees regularly that when families do not have access to professionals such as attorneys, it can be daunting to try to understand what resources are available. This process, Fernández-Pastrana notes, “emotionally…takes a toll.” In reflecting on their work with schools during the first year of the clinic, the EASE team says they have experienced “openness and cooperation.” In the coming year, the team plans to focus on continuing to forge relationships across school systems to meet their commons goals and help families thrive.