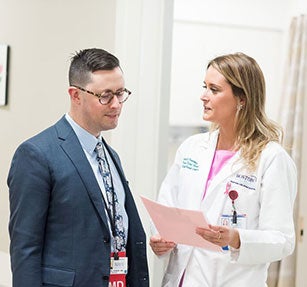 How Is Breast Cancer Treated?

Most women with breast cancer will have some type of breast surgery as part of their treatment plan. The purpose of surgery is to remove as much of the cancer as possible. There are several types of surgery, including surgery to remove the cancer, surgery to see whether the cancer has spread, surgery to reconstruct the breast after it or part of it has been removed and surgery to relieve the symptoms of advanced cancer.

There are several treatments for breast cancer. The order in which a patient receives these treatments depends on the tumor. Not all patients will need all forms of treatment.

Breast-conserving surgery (BCS) removes only part of the breast. How much of the breast is removed depends on the size of the tumor and where it is located. The medical term for this kind of surgery is a partial (or segmental) mastectomy. It is also called a lumpectomy.

All tissue removed is sent to a lab for pathologic analysis. If cancer cells are found on, or even near, the edges of the tissue, it is possible cancer cells may still be in the breast. This often means more surgery, and for some, it may mean having a mastectomy.

Breast-conserving surgery is often followed by radiation therapy to kill any cancer cells that may still be in the breast after surgery. BCS may not be an option for women who are unwilling to get or cannot receive radiation treatment.

Side Effects of Breast Surgery

As with any treatment, side effects are always a possibility. Possible side effects for breast surgery include

Lymph node surgery is performed to find out whether the cancer has spread to the lymph nodes under the arm. One or more lymph nodes may be removed for examination under a microscope in one of two ways: an axillary lymph node dissection or a sentinel lymph node biopsy.

An axillary lymph node dissection is usually performed at the time of breast-conserving surgery or mastectomy but can also be performed as a separate surgery. Between 10 and 40 (usually under 20) lymph nodes are removed. This is no longer the most common form of lymph node surgery.

For a sentinel lymph node biopsy, a radioactive substance and/or a blue dye is injected into the breast. It circulates through the breast lymphatic system until it reaches the first node to receive lymph from the tumor. If the cancer has spread, these nodes are the most likely to contain cancer cells. The surgeon looks for the nodes containing the blue dye and uses a special detector to find the ones containing radiation and removes them.

Side Effects of Lymph Node Surgery

The possible side effects of lymph node surgery include

Reconstructive or breast implant surgery is not meant to cure the cancer. It is done to restore the appearance of the breast(s) after surgery. Depending on whether radiation therapy is part of the treatment plan, it is possible for breast reconstruction or implant surgery to be done at the time of breast-conserving surgery or mastectomy.

Surgeons can reconstruct the breast in several ways. The best type of reconstruction for a patient varies depending on the patient’s age, body type, and the type of cancer the patient had. Patients who are interested in having breast reconstruction or breast implant surgery should ask their breast surgeon for a referral to a plastic surgeon for consultation or further evaluation.

The use of cancer-killing drugs to treat cancer is called chemotherapy. The drugs can be administered intravenously, injected, or taken by mouth as a pill or a liquid. Once the drugs have entered the bloodstream, they circulate throughout the body, making them useful in killing any cancer cells that have spread to other parts of the body.

Chemotherapy can be used either before or after surgery. It can be used as neoadjuvant therapy (therapy administered before surgery to shrink the tumor(s), so they are small enough to be removed by breast-conserving surgery rather than mastectomy) or as adjuvant therapy (additional therapy administered after surgery to patients who appear to be cancer free) to lower the chances of the cancer returning. .

Chemotherapy is generally given in cycles. Each round of treatment is usually followed by a rest period. The time between cycles tends to be two or three weeks but can vary depending on the drug or combination of drugs being used. Treatment for patients with early-stage breast cancer lasts roughly three to six months. For patients with cancer in the advanced stages, it can last much longer, often until the drugs are no longer working.

A woman’s menstrual cycle may stop while she is undergoing chemotherapy. This does not mean she cannot get pregnant. Women who plan to be sexually active during chemotherapy treatment should speak with their physician about effective birth control methods, as the chemo drugs can have harmful effects on the fetus.

Side Effects of Chemotherapy

There are several possible side effects women can experience while undergoing chemotherapy. Possible short-term side effects include

Most short-term side effects go away once treatment is completed. Those experiencing difficulty with side effects should speak with their physician, as there are ways to relieve them.

Possible long-term side effects include

Hormone therapy is also used to reduce the risk of the cancer returning after surgery and to treat advanced-stage cancer.

Possible side effects associated with AIs include muscle or joint pain and bone thinning. Sometimes switching from one AI to another can relieve side effects. Women who are unable to tolerate the side effects of AIs are often switched to one of the estrogen-blocking drugs.

Luteinizing hormone-releasing hormone (LHRH) analogs are used to shut down the ovaries to lower estrogen levels in premenopausal women. LHRH analogs are mostly used to aid other hormone therapy drugs, though they can be used to treat advanced hormone receptor-positive breast cancers on their own. Possible side effects are similar to those of menopause, including hot flashes, mood swings, night sweats, and vaginal dryness.

Surgery to remove the ovaries can be performed in place of using LHRH analogs to lower estrogen levels in women who have not gone through menopause.

One out of five breast cancers have an overabundance of the protein HER2/neu (American Cancer Society, 2015b). Certain drugs target this protein to prevent it from fueling cancer growth.

The possible side effects associated with targeted therapy drugs are generally mild but include:

External beam radiation therapy (EBRT) is usually administered in the radiation oncology department five days a week (Monday through Friday) for five to six weeks, though some newer methods have cut down treatment time to a few weeks or less.

If radiation is recommended, the patient will return for a planning session called a simulation where a CT scan will be obtained in the treatment position so a plan can be devised based on the patient’s anatomy.

Each treatment session is painless and generally lasts under 10 to 15 minutes.

Possible side effects include

Many of the skin changes associated with external beam radiation therapy improve within the first few months of therapy. Patients are examined and followed to make sure everything is improving as expected.

Three-dimensional (3-D) conformal radiation therapy is based on a CT scan of the region of the body being treated. Radiation oncologists use computer software to determine how the patient will look from any angle and identify the best paths to direct the radiation. The beams are specially made to maximize the effects of the radiation on cancer cells while minimizing its effect on surrounding healthy tissue. A multileaf collimator (a piece of equipment that is capable of blocking radiation) is used to protect areas that could potentially be harmed by the beams. Image Fusion technology, which allows several medical imaging modalities to be used simultaneously to aid in the targeting and planning of radiation therapy, is utilized to assist with three-dimensional conformal radiation therapy. This is routinely used at the Cancer Care Center to better define and understand the disease site. In addition to fusing CT and MRI 3-D data sets, physicians also fuse correlated PET scans and map areas of metabolic activity otherwise invisible to medical imaging. The end result is a finely tuned image set that allows the team to plan the most precise and effective treatment possible.