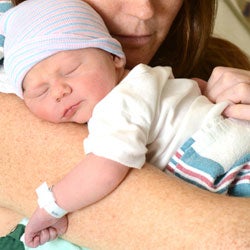 Infants born to mothers taking naltrexone to treat opioid use disorder during pregnancy developed no signs of neonatal opioid withdrawal syndrome (NOWS) during their hospitalization, a new study shows. In comparison to infants of mothers taking buprenorphine during pregnancy, infants exposed to naltrexone had shorter hospital stays, and mothers reported no use of other opioids during their pregnancy. Led by researchers at Boston Medical Center (BMC), the findings provide important preliminary data on the outcomes for both mother and baby when naltrexone is used to treat opioid use disorder during pregnancy.

Neonatal opioid withdrawal syndrome (NOWS) affects infants exposed to opioids in utero. With the increase in both unprescribed and prescribed opioids use in the U.S., there has been a five-fold increase in the rate of NOWS over the past decade. Approximately 50 to 80 percent of opioid-exposed infants have required medication to manage their withdrawal symptoms, which usually appear two to three days after birth. These can include irritability, trouble eating and sleeping, diarrhea, muscle rigidity, and difficulty soothing.

Naltrexone, buprenorphine and methadone are three FDA-approved medications prescribed to treat opioid use disorder. However, there is limited data on the use of naltrexone during pregnancy in terms of safety and efficacy given its relative short time on the market. This study, published in Clinical Therapeutics, followed mother-infant dyads during their pregnancy and after delivery at one academic medical center between 2017 and 2019. Six of the mothers were taking naltrexone to treat their opioid use disorder before and during their pregnancy, and 12 were taking buprenorphine. The two groups were monitored and compared based on participants’ opioid use via urine toxicology reports, provider reports during pregnancy and six months post-delivery, delivery outcomes, gestational age, birth weight, APGAR scores, NICU admission, and NOWS outcomes (diagnosis, pharmacologic treatment, total hospital length of stay). Maternal demographics were also compared between all participants.

The infants born to women taking naltrexone showed no withdrawal symptoms during their initial hospitalization, compared to 92 percent of infants born to women taking buprenorphine. Of those showing symptoms, 46 percent required medication to treat their withdrawal symptoms. Additionally, 83 percent of women in the naltrexone cohort breastfed, without any immediate issues in the perinatal period.

“While these study results are preliminary, the outcomes we observed for both mother and baby when naltrexone is used to treat opioid use disorder during pregnancy are promising,” said Elisha Wachman, MD, a neonatologist at BMC and the study’s corresponding author.

Previous research has compared methadone and buprenorphine as standards of care for pregnant women with OUD. It was confirmed that buprenorphine was associated with lower risks of preterm birth, greater birth weight, larger head circumference, and less severe NOWS compared with women taking methadone. Women treated with buprenorphine also had improved compliance with prenatal care and less unprescribed substance use during the pregnancy. The use of naltrexone during pregnancy is relatively new given that it was FDA-approved in 2010.

“Our findings support the need for a larger multi-center study examining the long-term maternal and child safety and efficacy outcomes of naltrexone during pregnancy,” said Wachman, who also is an associate professor of pediatrics at Boston University School of Medicine. “If those studies yield positive outcomes for both mother and baby, continuing women on naltrexone during their pregnancy could be another safe approach to treat opioid use disorder.”

Another important finding in the study was that women taking naltrexone received prenatal care later during their pregnancy than women taking buprenorphine, which could indicate that patients and/or providers are not clear on its safety during pregnancy. In addition, the authors note that the most important aspect of treating opioid use disorder during pregnancy is keeping the mothers stable on their medication to decrease any risk of relapse.