A program developed and studied at Boston Medical Center (BMC) found that symptom-triggered medication dosing for neonatal withdrawal syndrome, instead of infants receiving a fixed schedule of medication, could be a more effective intervention for these infants and could help reduce unnecessary medication exposure. 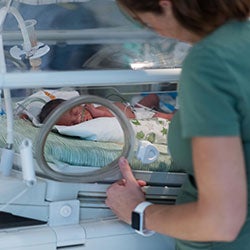 Neonatal Opioid Withdrawal Syndrome (NOWS) effects infants exposed to opioids in utero. With the increase in both unprescribed and prescribed opioids use in the U.S., which has not spared pregnant women, there has been a five-fold increase in the rate of NOWS over the past decade. Approximately 50 to 80 percent of opioid-exposed infants require medication to manage their symptoms of withdrawal, which usually appear two to three days after birth and can include irritability, trouble eating and sleeping, diarrhea, muscle rigidity, and difficulty soothing.  Medications that are currently used to manage these symptoms include methadone, morphine, and buprenorphine. The average hospital stay for infants with NOWS who are treated with medication is 23 days and costs approximately $93,000.

At BMC, clinicians utilize non-pharmacologic care interventions, including parental presence at the bedside, breastfeeding, and rooming in, as first line treatment of NOWS, which studies have shown to reduce the need for medication and hospital length of stay, thus reducing costs. If an infant is having difficulties with these core functions after using the non-pharmacologic treatments, the health care team determines if medication is the appropriate next step.

In this study, for infants who required medication for NOWS, the researchers investigated two treatment approaches: between June 2016 and November 2017, the fixed schedule medication approach was used, in which methadone was dosed every eight hours with the traditional slow taper to treat NOWS. Between December 2017 and May 2018, the researchers implemented the symptom-triggered approach, which was developed by clinician researchers at BMC as a novel way to treat NOWS by focusing on treating symptoms and keeping the infants comfortable. This approach helps reduce the incidence of creating a dependence on the opioid medication, which can sometimes occur with the traditional fixed scheduled medication approach.

Infants who were treated using the symptom triggered approach had a median length of stay of 10.5 days, versus 17 days for the fixed schedule approach. The symptom triggered group had 5.6 fewer days of methadone treatment compared to the fixed-medication schedule group. In addition, the percentage of infants who were successfully treated using the symptom-triggered approach reached 100 percent by the end of the study period, and there were no adverse events resulting from this treatment approach.

“Our study showed that treating symptoms acutely with medication, and not having a fixed schedule with a long taper not only improves patient outcomes, but shortens their hospitalizations and decreases further exposure to opioid medications,” said Elisha Wachman, MD, the study’s corresponding author who is a neonatologist at BMC and an associate professor of pediatrics at Boston University School of Medicine. “This novel approach prioritizes the non-pharmacologic care approach for infants experiencing withdrawal symptoms and decreases the risk for unintended dependence that frequently occurs when infants are placed on prolonged methadone or morphine tapers.”