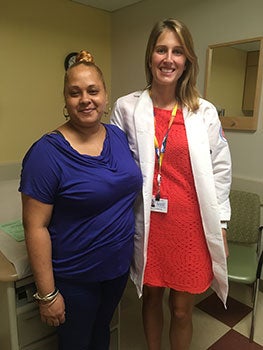 Longtime BMC patient, Rachael Ali, woke up from her sleep on a seemingly normal morning in May of 2019. However, fairly quickly she noticed that something was not right. No matter what she did, she realized she was unable to speak. She alerted her two children as to what was going on, and her daughter immediately rushed her to the emergency room at BMC.

ER staff quickly realized that Racheal was having a stroke, and notified BMC’s Chief of Neurology, Dr. David Greer, MD, MA. Dr. Greer specifically noted that Rachael was having difficulty opening her eyes, and was experiencing weakness in both of her arms and legs. He diagnosed her with a clot in the basilar artery, which is a crucial part of the blood supply system for the brain, formed at the base of the skull.

Rachael was swiftly brought to the neurointerventional suite under the combined care of Dr. David Greer, Dr. Thanh Nguyen and Dr. Alice Ma. Within 35 minutes, the clot was successfully removed. Just two days later, Rachael was well onto the road to recovery. She was discharged from BMC, and returned home with her speech completely back to normal.

"I moved to Boston at age 17, and have always used Boston Medical Center as my hospital. To me, the doctors there are #1, because they have never failed me in any way,” Rachael comments.

This experience has truly given Rachael a new outlook on life. She was able to return to work quickly, resume her normal activities, spend more quality time with her two children -- she even quit smoking.

“I have so much faith in the doctors at BMC. Thank you so much for giving me another chance to live, I am very grateful. I have overcome it all with your help!”