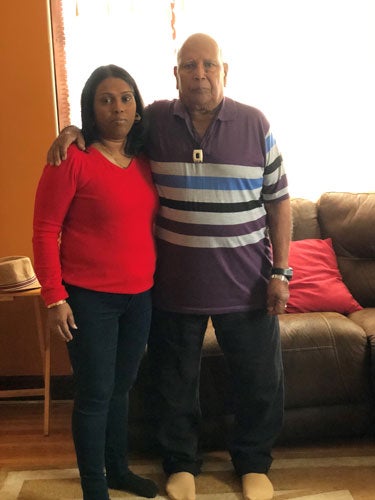 Moonsamy Buchan was very lucky that his daughter, Shamila Buchan, was with him at his Dorchester home on the night of December 27, 2017.  He went to bed about 9:30 that night and around 2:30, his daughter happened to checked on him.  When she did, Shamila realized her dad could not speak, get out of bed, or move his right arm or leg.

Shamila called 911, and Moonsamy was immediately brought to Carney Hospital where he was evaluated by Gary Cole, MD, an emergency medicine physician. Moonsamy had a major stroke and there was a blood clot in a large artery at the base of his brain. His NIH Stroke Scale was 25, which is considered a severe stroke. Dr. Cole called the acute stroke team at Boston Medical Center who reviewed the images of Moonsamy’s brain and agreed to remove the clot.

Moonsamy arrived at BMC at 5:23 AM. His care team, Thanh Nguyen, MD and Mohamed Abdalkader, MD brought him directly to the neurointerventional suite to remove the clot. Within five minutes, a catheter was fed into the patient and by 6:10 AM, the blocked artery was successfully opened.

Moonsamy had a dramatic recovery, regaining almost complete strength of his right arm and leg, and significant improvement in his speech. He is now home, able to talk, walk, and take care of himself. "We are happy to have him back and have him strong," says his son, Venkasammy Buchan.

"I feel like my dad had an awesome recovery. He has improved so much." notes his daughter Shamila.

"We give great thanks to Dr. Cole who made the rapid diagnosis, and the interventional neurology stroke team at Boston Medical Center." 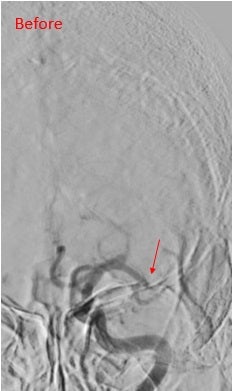 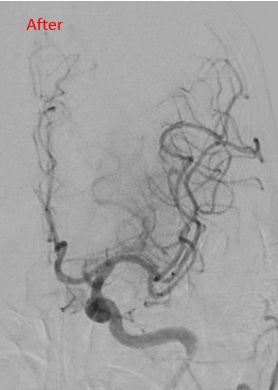