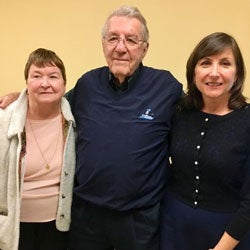 When Henry’s wife, Jean, realized he was unable to speak, she called 911. When the ambulance arrived at their home, the EMT’s quickly recognized that Henry was aphasic (couldn’t speak) and could not move his right side, so he was taken to Boston Medical Center.

Upon arrival, Henry was met by emergency medicine physician Benjamin Nicholson, MD, and neurologists Julie Shulman, MD and Mali Sharma, MD. He was quickly diagnosed with an acute stroke from a clot in the left middle cerebral artery, the main artery that brings blood to the left side of the brain. His NIH Stroke Scale was 25, which is considered severe.

Henry was immediately prepped by his stroke care team - Thanh Nguyen, MD, Mohamad Abdalkader, MD and Eugene Kim, MD – for clot removal. Within 40 minutes, the blocked artery was successfully opened. In the following days, Henry’s right side strength began to come back, but he wasn’t speaking much. His family brought in some of his favorite music to play at his bedside, and eventually, Henry started singing. A few days later, his family recalls him finally asking when he could have a big meal!

Henry was eventually transferred to rehab and ultimately returned home to his normal, independent lifestyle. "I think it was an amazing recovery,” notes his daughter, Mary Ellen. “All of the nurses and aids were top notch. They were so kind and he was never left alone. They would sing with him, pray with him. They were wonderful. His recovery was beyond our expectations.”

Henry still enjoys doing crossword puzzles and playing black belt Sudoku. His speech has fully returned and he is able to walk with a cane. Up until the day his stroke occurred, at 88-years-old, Henry was still working full time as an engineer. Now, he is enjoying retirement with his wife, three children, and four grandchildren.

Henry now chuckles thinking back to that day when the stroke occurred.

“They saved my life. Now I feel great.”