Osteonecrosis of the Hip 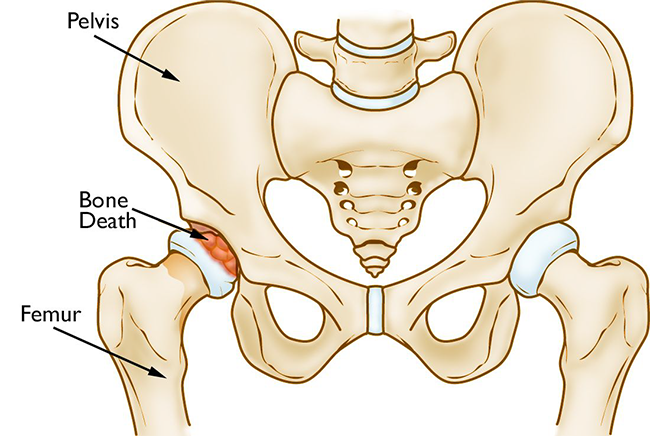 In osteonecrosis, the bone in the head of the femur slowly dies.

Osteonecrosis of the hip is a painful condition that occurs when the blood supply to the head of the femur (thighbone) is disrupted. Because bone cells need a steady supply of blood to stay healthy, osteonecrosis can ultimately lead to destruction of the hip joint and severe arthritis.

Osteonecrosis is also called avascular necrosis (AVN) or aseptic necrosis. Although it can occur in any bone, osteonecrosis most often affects the hip. More than 20,000 people each year enter hospitals for treatment of osteonecrosis of the hip. In many cases, both hips are affected by the disease.

The hip is one of the body's largest joints. It is a "ball-and-socket" joint. The socket is formed by the acetabulum, which is a part of the large pelvis bone. The ball is the femoral head, which is the upper end of the femur (thighbone).

The bone surfaces of the ball and socket are covered with articular cartilage, a smooth, slippery substance that protects and cushions the bones and enables them to move easily.

Osteonecrosis of the hip develops when the blood supply to the femoral head is disrupted. Without adequate nourishment, the bone in the head of the femur dies and gradually collapses. As a result, the articular cartilage covering the hip bones also collapses, leading to disabling arthritis.

Osteonecrosis can affect anyone, but is more common in people between the ages of 40 and 65. Men develop osteonecrosis of the hip more often than women.

Who is at risk of developing osteonecrosis?

It is not always known what causes the lack of blood supply, but providers have identified a number of risk factors that can make someone more likely to develop osteonecrosis:

What are symptoms of osteonecrosis?

Osteonecrosis develops in stages. Hip pain is typically the first symptom. This may lead to a dull ache or throbbing pain in the groin or buttock area. As the disease progresses, it becomes more difficult to stand and put weight on the affected hip, and moving the hip joint is painful.

It may take from several months to over a year for the disease to progress. It is important to diagnose osteonecrosis early, because some studies show that early treatment is associated with better outcomes.

How is osteonecrosis diagnosed?

After discussing your symptoms and medical history, your provider will examine your hip to discover which specific motions cause your pain?

Patients with osteonecrosis often have severe pain in the hip joint but relatively good range of motion. This is because only the femoral head is involved in the earlier stages of the disease. Later, as the surface of the femoral head collapses, the entire joint becomes arthritic. Loss of motion and stiffness can then develop.

X-rays. X-rays provide images of dense structures, such as bone. X-rays are used to determine whether the bone in the femoral head has collapsed and to what degree.

Magnetic resonance imaging (MRI) scans. Early changes in the bone that may not show up on an x-ray can be detected with an MRI scan. These scans are used to evaluate how much of the bone is affected by the disease.  An MRI may also show early osteonecrosis that has yet to cause symptoms (for example — osteonecrosis that may be developing in the opposite hip joint).