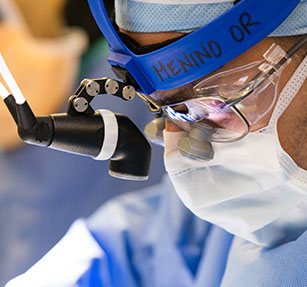 Femoroacetabular impingement (FAI) is a condition in which extra bone grows along one or both of the bones that form the hip joint — giving the bones an irregular shape. Because they do not fit together perfectly, the bones rub against each other during movement. Over time this friction can damage the joint, causing pain and limiting activity.

The hip is one of the body's largest joints. It is a "ball-and-socket" joint. The socket is formed by the acetabulum, which is a part of the large pelvis bone. The ball is the femoral head, which is the upper end of the femur (thighbone).

The bone surfaces of the ball and socket are covered with articular cartilage, a smooth, slippery substance that protects and cushions the bones and enables them to move easily.

What are different types of Femoroacetabular Impingement (FAI)?

There are three types of Femoroacetabular Impingement or FAI: pincer, cam, and combined impingement:

FAI occurs because the hip bones do not form normally during the childhood growing years. It is the deformity of a cam bone spur, pincer bone spur, or both, that leads to joint damage and pain. When the hip bones are shaped abnormally, there is little that can be done to prevent FAI. Some people may live long, active lives with FAI and never have problems. When symptoms develop, however, it usually indicates that there is damage to the cartilage or labrum and the disease is likely to progress.

Because athletic people may work the hip joint more vigorously, they may begin to experience pain earlier than those who are less active. However, exercise does not cause FAI.

What are symptoms of Femoroacetabular Impingement?

The most common symptoms of FAI include:

Pain often occurs in the groin area, although it may occur toward the outside of the hip. Turning, twisting, and squatting may cause a sharp pain. Sometimes, the pain is just a dull ache.