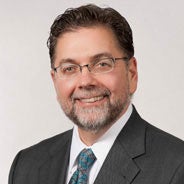 We are pleased to announce the appointment of Gregory A. Grillone, MD, FACS, as M. Stuart Strong and Charles W. Vaughan Professor and Chair of the Department of Otolaryngology-Head & Neck Surgery at BU School of Medicine and Chief of Otolaryngology-Head & Neck Surgery at Boston Medical Center, effective immediately. Dr. Kenneth Grundfast who served as chair for the last 17 years, announced his plans to retire last year once a successor was named.

Dr. Grillone joined our community as a resident in 1988. Currently Professor and Vice Chair of the Department, he is an accomplished leader, a highly skilled clinician and a mentor to many medical students, residents and fellows. Greg has served in a variety of roles for BMC, including Interim Chief Medical Officer, Board of Trustee member, Associate Chief Medical Officer, President of the Medical-Dental Staff and Chair of the Graduate Medical Education Committee.

As Vice Chair since 1999, he has helped build the Department into a thriving practice with 12 full-time clinical faculty, several PhD research faculty and robust audiology and speech language pathology services. Greg served as the residency program director for 17 years and helped establish it as one of the best otolaryngology training programs in the east. During his tenure as director he expanded the program from 10 to 15 residents, and its current complement includes eight women and one underrepresented minority.

Dr. Grillone received his bachelor's degree in biology from New York University and his MD from Mount Sinai School of Medicine, NYC. He completed his residency in otolaryngology-head and neck surgery at the Boston University-Tufts University Combined Residency Program.

Dr. Grillone's research interests include the use of spectroscopy for the early detection of dysplasia and squamous cell carcinoma in the oral cavity and larynx, and the study of dietary and lifestyle risk factors in the development of squamous cell cancer of the head and neck. His clinical interests include the development of mini hole laryngoplasty for vocal fold augmentation and the use of robotic instruments in microlaryngeal surgery.

An author of more than 85 publications, reviews, proceedings and abstracts, Greg has lectured worldwide and is the recipient of numerous honors and awards, including the 2016 Edmund Prince Fowler Award from the Triological Society for the most outstanding research thesis, the BUSM Charles W. Vaughan Excellence in Teaching Award (2015 and 2006), the Distinguished Service Award from the American Academy of Otolaryngology-Head and Neck Surgery (2014) and the Triological Society's Vice-Presidential Citation (2011). Dr. Grillone has been named one of America's Top Doctors and Best Doctors in America every year since 2005, and one of Boston's Top Docs since 2006.

We would like to thank Rhoda Alani, MD, BMC Chief and BUSM Chair of Dermatology, who headed the search committee, and the members of the committee for their work to develop a very strong candidate pool.