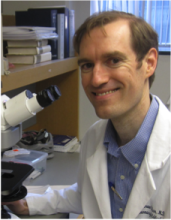 Led by Andrew Wilson, MD and Rhiannon Werder, PhD of the Center for Regenerative Medicine (CReM) at Boston Medical Center and Boston University, the researchers utilized patient-derived liver cells termed “iHeps”, that mimic the biology of liver hepatocytes, the main producers of alpha-1 antitrypsin protein in the body that likewise perform important metabolic, endocrine and secretory functions. The base editing technology corrected the Z mutation responsible for AATD and reduced the effects of the disease in the hepatocytes, demonstrating successful base editing in human cells. These results, published in Molecular Therapy, can help pave the way for future human trials.

“This study shows the successful application of base editing technology to correct the mutation responsible for AATD in liver cells derived from patients with this disease,” says Wilson, a pulmonologist at Boston Medical Center and an associate professor of medicine at Boston University School of Medicine, who served as the study’s corresponding author. “I am hopeful that these results will create a pathway to use this technology to help patients with AATD and other monogenic diseases.”

Base editors created by Beam Therapeutics were applied to induced pluripotent stem cells (iPS cells) from patients with AATD, and then again in hepatocytes that were derived from iPS cells. This was done to study the correction of the “Z” mutation of the gene responsible for AATD in human cells.

The Z mutation in the SERPINA1 gene is responsible for causing chronic, progressive lung and liver disease in AATD. In patients with AATD, the mutant AAT proteins misfold and form aggregates of protein that build up inside the hepatocytes and cause damage.

For this study, researchers started with mutant (ZZ) iPSCs created from a patient with AATD. After the base editing process was completed, the DNA from the edited cells was sequenced to determine if the SERPINA1 gene had been corrected. Clonal populations of cells with either one (MZ) or both copies (MM) of the corrected gene were expanded and then differentiated over the course of 25 days to generate hepatocytes. After sequencing the entire genome of the edited cells, there was no evidence of inadvertent mutations in the genome from the base editors, and the misfolding and associated protein buildup was partially corrected in MZ cells and completely in MM normal cells.

The process was repeated using hepatocytes derived from the mutant iPSCs. Two base editors were used in different conditions to test the efficiency of this process. In the best conditions, about 50% of the mutant genes were successfully edited. The cells were then analyzed to see if they still appeared “hepatic” and if there were fewer signs of the disease in the edited cells, compared to mutant ZZ cells. Findings showed the base editing did not alter the hepatic program, and the liver cells still expressed hepatic genes and proteins at normal levels. In addition, there was less accumulation of aggregated misfolded “Z” AAT protein, showing less evidence of disease in the edited cells.

While augmentation therapy has been shown to slow the progression of lung disease in AATD patients, there are currently no treatments available for AATD-associated liver disease. Emerging treatment strategies have focused on the correction of the Z mutation.

Base editing is being evaluated as a treatment modality for a variety of monogenic diseases. Alpha-1 antitrypsin deficiency is a prime target for base editing, likely to be one of the earlier diseases in which base editors are tried in human studies. Additional disease targets include retinal disease, hereditary tyrosinemia, sickle cell anemia, progeria, cystic fibrosis and others.

Findings of this study suggest that future research may explore the usefulness of base-editors in editing other quiescent cell populations. Additionally, it has recently been shown that base-editors can edit RNA in additional to DNA in immortalized cell lines and warrants further investigation.

This study was supported by a CJ Martin Early Career Fellowship from the Australian National Health and Medical Research Council awarded to R.B.W. and NIH grant U01TR001810 and R01DK101501 awarded to A.A.W. The study was funded in part by a research grant from Beam Therapeutics.