Boston – A new study out of Boston Medical Center’s Grayken Center for Addiction on opioid overdose survivors indicates that two FDA approved medications to treat opioid use disorder save lives, but only three out of 10 overdose survivors receive them. Using a novel public health dataset from the Massachusetts Department of Public Health, the researchers found that those who received methadone or buprenorphine had significant reductions in all-cause and opioid-related mortality after surviving an overdose compared to individuals not taking medication.  In addition, the results underscore the missed opportunities to identify individuals with opioid use disorder and engage them in treatment when and wherever they enter the health care system with opioid-related harms.

Published in the Annals of Internal Medicine, this study is the first of its kind to examine the association between using medication to treat opioid use disorder and mortality in patients who had a nonfatal opioid overdose.

Patients with opioid use disorder (OUD) are at an increased risk of death - in this study, five percent of patients who initially survived an overdose died within one year. There are currently three FDA approved medications to treat OUD, which are methadone, buprenorphine and naltrexone. Numerous studies have shown these medications to be effective in decreasing cravings and use of opioids as well as keeping patients in treatment for OUD. 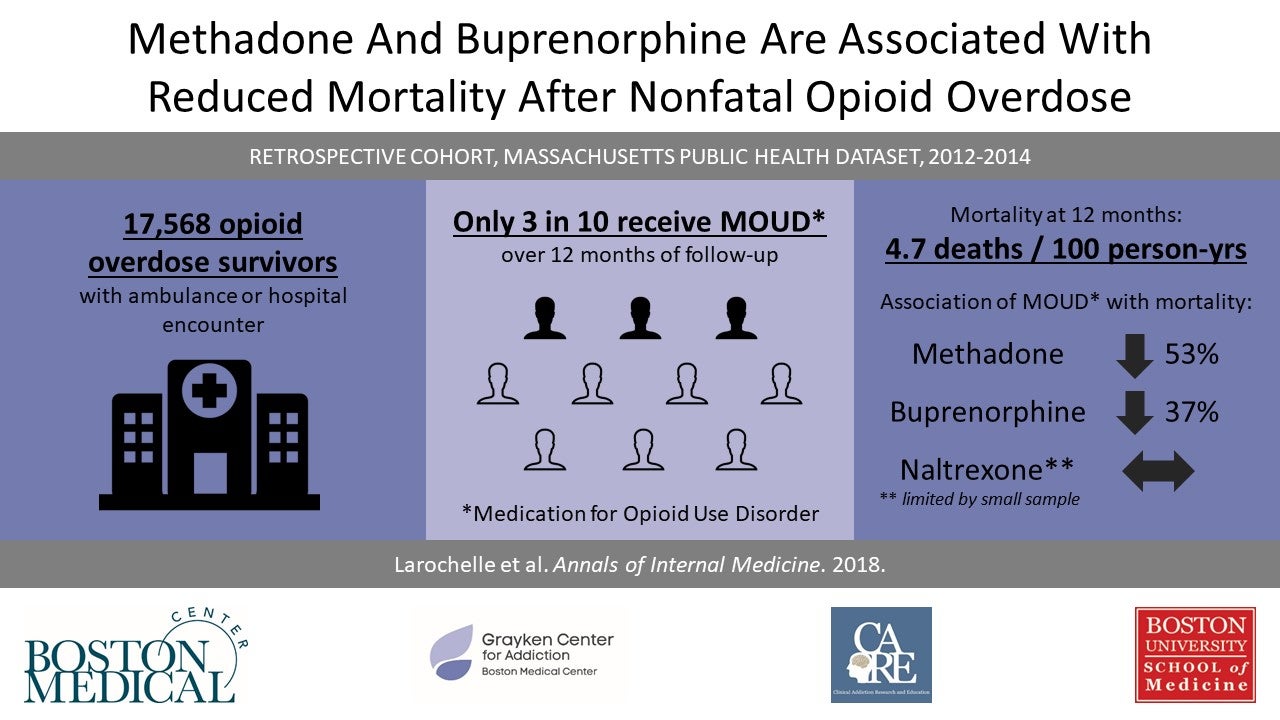 For this study, BMC collaborated with the Massachusetts Department of Public Health and analyzed data from cases where a person survived an overdose and whether the three medications used to treat OUD were associated with mortality. The data was made available for analysis through Chapter 55 of the Acts of 2015, which linked data at the individual level from 16 agencies, allowing researchers to better understand the circumstances of and potential solutions to the increasing burden of fatal and non-fatal opioid overdoses.

The researchers identified 17,568 cases where an adult in Massachusetts survived an overdose between 2012 and 2014. The cohort was 62 percent male and 69 percent were under the age of 45. After surviving the overdose, there was a 59 percent reduction in mortality for individuals who were taking methadone compared to those who were not taking medication. For individuals who were receiving buprenorphine, there was a 38 percent reduction in mortality. The data indicated no association with a change in mortality for patients receiving naltrexone compared to patients not receiving medication.

“The data are clear – buprenorphine and methadone reduce mortality for individuals with opioid use disorder, but far too few receive them,” said Marc Larochelle, MD, general internist and researcher at BMC’s Grayken Center who serves as the study’s lead author.

The authors suggest potential care delivery reforms to improve access to effective treatment. These include getting more providers in emergency and inpatient settings trained and waivered to prescribe these medications, as well as having better access to linking these patients with primary care physicians trained to care for them.

“We have few treatments that offer the potential to reduce mortality as we observed for buprenorphine and methadone in this study,” said Larochelle, who is an assistant professor of medicine at Boston University School of Medicine. “As providers, we need to reform our delivery system to reduce barriers and improve access to and retention in medication treatment, especially when individuals come to us with opioid-related harms. It’s a matter of life and death.”

The authors indicate that the limited number of individuals who received naltrexone preclude drawing confident conclusions about an association with change in mortality.