A new policy allows pharmacists in Massachusetts to hand out an overdose-reversing drug anywhere.

You're on your way to work when you come across a stranger lying on the sidewalk, struggling to breathe and apparently dying of an opioid overdose. One dose of the lifesaving drug naloxone could revive her, but you don't have it on you. So you call 911. By the time the paramedics arrive, it's too late. In just minutes, that person has become one of more than 130 Americans who will die from an opioid overdose each day, even while an antidote is stocked in continuous, sufficient supply behind pharmacy counters.

Naloxone, also known by its brand name Narcan, displaces opioids from their receptors in a person's brain and can reverse an overdose when administered quickly enough. The growing use of naloxone has been credited with contributing to a recent drop in overdose deaths nationwide, but access barriers still often prevent it from ending up in the hands of the people who could use it to save lives.

Most states have created standing orders that allow pharmacies to dispense naloxone without a prescription to any individuals at risk of overdose, as well as to the people who could help them. But in practice, these laws aren't enough, says Sebastian Hamilton, director of outpatient pharmacy at Boston Medical Center (BMC) and a member of the Massachusetts Board of Registration in Pharmacy.

"Going to a pharmacy to pick up naloxone is inherently a barrier," Hamilton says. "The very patients who need naloxone probably have apprehension about walking into a pharmacy and providing their personal information. And they may or may not have insurance. So even though the standing order is available, it's really not helping the people who need it the most."

A new remote dispensing policy in Massachusetts that took effect on August 1 has removed that barrier. The policy allows any Massachusetts pharmacist to hand out a naloxone rescue kit on the spot, wherever they are — in parks and supermarkets, at training events, or wherever else they may be. Community members can walk away with exactly what they need to save a life, rather than an obligation to head to a Walgreens or CVS.

Eliminating the need for a pharmacy visit will save lives, experts say, and is an important first step in making naloxone even more widely available — perhaps eventually over the counter.

"We know there are certain strategies that are really effective in addressing the opioid crisis. Naloxone is one of them," says Alex Walley, MD, an internist and researcher at the Grayken Center for Addiction at BMC, who helped draft the new policy. "It's not a question of figuring out what works. It's figuring out how to make it work."

Improving upon the standing order

Although naloxone prescribing has skyrocketed in recent years, doubling from 2017 to 2018, the availability and use of the drug still lags the need.

Once people arrive at the pharmacy, inconveniences often await: long lines, forms that need filling out, and questions from the pharmacist. Even highly motivated individuals tend to find these barriers frustrating, but people in complicated, stigmatizing situations may be deterred from picking up naloxone altogether. At BMC's pharmacies, about 1 in every 4 filled orders is never picked up, according to Hamilton.

Hamilton raised this issue to his colleagues at the Massachusetts Board of Registration in Pharmacy. Initially, BMC proposed an 18-month-long pilot program to provide naloxone directly to patients at training events throughout the month of September, which is National Recovery Month. Problems with naloxone availability and access had already become a point of discussion among the Board, says Hamilton. When he approached the Board to discuss the topic once again, the writing on the wall couldn't have been clearer: a solution was urgently needed. Rather than considering BMC's pilot, the Board moved straight into drafting the policy that would support point-of-care naloxone dispensing.

For years, most of the naloxone in Massachusetts has been distributed through nonmedical community-based organizations, such as outreach programs and support groups. However, these programs can't reach everywhere in every state.

"If there's an overdose outbreak in a community, we can now set up mobile pharmacy distribution sites there, and pharmacists can distribute naloxone close to where the overdoses are occurring," says Walley.

The new policy enables pharmacists and providers to respond more rapidly to overdose data, including localized spikes in overdose deaths.

In contrast to providers at commercial pharmacies who will still need to bill insurance, pharmacists at BMC are positioned to distribute naloxone at training events for free, without needing to know patients' names. That anonymity is important, says Hamilton, because it will allow the medication to reach people who would otherwise be reluctant to seek a prescription due to stigma or other concerns.

Moreover, there are no limits to how much naloxone a person can be prescribed. To start, BMC plans to distribute hundreds — perhaps even thousands — of rescue kits at naloxone trainings throughout the month of September. And once these kits are out of a pharmacist's hands, recipients can hand them out to whomever they wish.

More is needed to get ahead of the epidemic

While this policy is an important step in solving the opioid problem, Hamilton and Walley are hopeful that it's only the beginning. Their ultimate goal is to have naloxone available over the counter.

"Tylenol, aspirin — those can cause more harm than naloxone, so why isn't naloxone over the counter?" says Hamilton, noting that naloxone is incredibly low-risk for the person who receives the dose, even if they don't have any opioids in their system.

However, he adds, the irritability and other behaviors that a revived person may exhibit coming out of an overdose — which pharmacists train naloxone carriers to address appropriately to protect themselves and the other person — complicate the logistics of over-the-counter availability. Policy may require interim steps to reach that point. "But the laws are going to catch up too late, and so many people are going to die in the meantime. We're trying to get past that, to get to the endgame sooner than later. That's why we're pushing so hard." 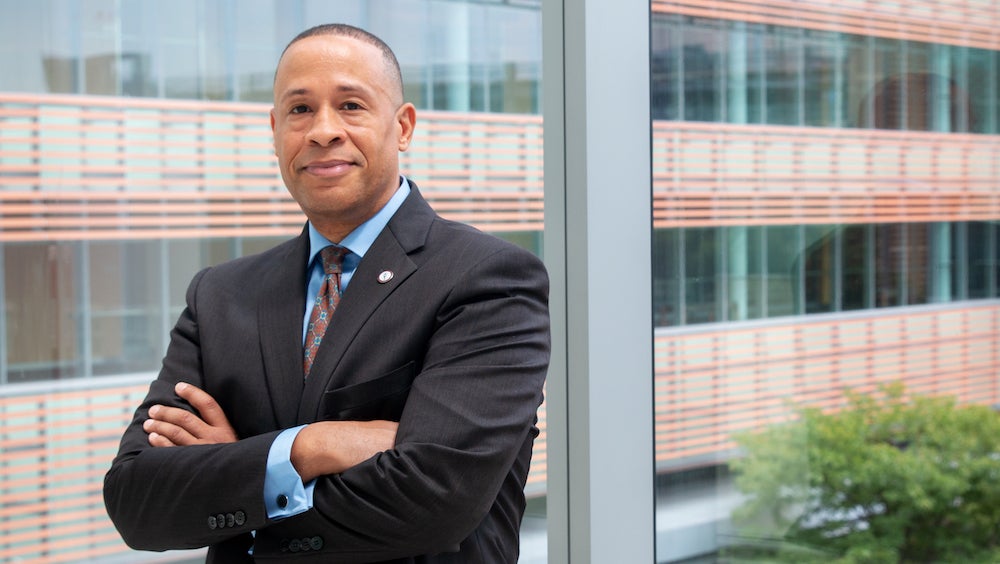 Sebastian Hamilton, director of outpatient pharmacy at Boston Medical Center and a member of the Massachusetts Board of Registration in Pharmacy, helped draft the state's new naloxone policy. (Yael Bermudez)

The team stresses that naloxone doesn't enable drug users, as some critics have argued. By increasing access to this drug through this policy, their goal is simple: to save lives.

According to Walley, widespread, low-barrier naloxone availability should be thought of like access to fire extinguishers and defibrillators: Fire extinguishers don't add to fires, and defibrillators don't increase the prevalence of heart attacks. These measures, like naloxone, only prevent disaster. In fact, says Walley, when naloxone kits are distributed to the highest-risk populations, about one in eight of them is used to rescue somebody.

Every averted death is another opportunity to help that person get treatment, Walley adds.

"People aren't going to get better if they die," he says. "Naloxone gives us the opportunity to give people a second chance."

Kerry is a freelance writer holding a master’s in science writing from Johns Hopkins University. Her work has appeared in Boston University’s The Brink, Northeastern University’s [email protected], and Hippocampus Magazine, among others. She has also authored three nonfiction books, most recently about the opioid epidemic.