Myasthenia Gravis | Conditions We Treat | Boston Medical Center
BMC is seeing patients at our hospital and clinics—see how we’re keeping everyone safe. Book your next appointment today or learn about our telehealth options. 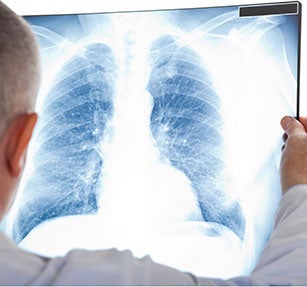 Myasthenia gravis (MG) is a chronic neuromuscular condition that causes weakness in voluntary muscles (skeletal muscles) that worsens with activity and improves with rest. It is caused by an abnormal response in the immune system.

The weakness occurs when the nerve impulses that initiate or sustain movement do not adequately reach the muscle cells because the immune system targets the body's own cells. This is called an autoimmune response. An immune system produces antibodies that attach to one’s own cells, which prevents muscles from receiving the message from the nerves.

Myasthenia gravis can occur at any time, but is more common in young women and older men.

The earliest symptoms of myasthenia gravis usually affect vision and include:

The cause of myasthenia gravis is unknown.

Factors that can make myasthenia gravis worse include:

The first method of diagnosis is the physical exam and medical history. The main indication of myasthenia gravis is weakness that worsens with activity and improves with rest. Tests that the physician may order to confirm a diagnosis include:

The physician will also order a:

CT scans use x-ray equipment and computer processing to produce 2-dimensional images of the body. The patient lies on a table and passes through a machine that looks like a large, squared-off donut. Doctors order CT scans when they want to see a two-dimensional image of the body to look for tumors and examine lymph nodes and bone abnormalities. If contrast dye is used to improve the computer image, the patient may need to avoid eating or drinking for 4 to 6 hours before the test. Patients should tell their provider before the test if they have any allergies or kidney problems.

This test uses a magnetic field, radiofrequency pulses, and a computer to produce detailed images of body structures in multiple places. You may be asked to drink a contrast solution for better imaging, and you will most likely lie on a moving table as pictures are taken. MRI is a more detailed tool than x-ray and ultrasound and for certain organs or areas of the body, it provides better images than CT. MRI may not be recommended if you have a pacemaker or other metal implant.

Doctors use a variety of treatments—alone or in combination—to relieve symptoms of myasthenia gravis.

including cholinesterase inhibitors, corticosteroids and immunosuppressants

There are several techniques for performing a thymectomy, including: