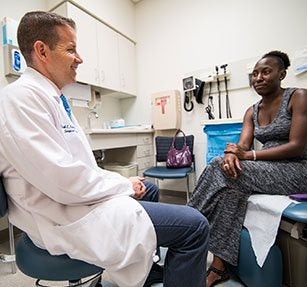 How Is Liver Cancer Treated?

Surgery is currently the most effective treatment for liver cancer, but it depends on the health of the patient. Two types of surgery are used to treat liver cancer. The first, called a partial hepatectomy, removes only the part of the liver infected by the cancer. The second, called a total hepatectomy, removes the entire liver. If the entire liver is removed, it will be replaced with liver tissue from a donor in a procedure called a liver transplant.

For a partial hepatectomy, the surgeon removes part of the liver and a margin of surrounding healthy tissue. The number, size, and location of the tumor(s) determines how much of the liver is removed. The surgeon can remove up to 75% of the liver in a healthy patient without causing him or her any long-term deficit. The remaining tissue performs all normal liver functions while the liver slowly regenerates itself. It may be several weeks before the liver fully regrows.

This type of surgery has several potential risks and side effects. Bleeding is a serious risk both during and after surgery. If too much tissue is removed during surgery, the liver may not be able to function properly, which can potentially lead to liver failure. Recurrence (the cancer returning) is also possible because the same damage that may have caused the original cancer is still present.

For a total hepatectomy, the entire liver is removed and replaced with liver tissue from a donor. This procedure is called a liver transplant. A liver transplant is an option for patients whose cancers are small but cannot be completely removed. This may be due to the location of the tumor(s) or poor liver function.

It may take a long time to find an appropriate match for a liver donation, and patients may remain on a waiting list for lengthy periods of time. In the interim, patients waiting for a liver will undergo other treatments to control the cancer.

In addition to the potential risks and side effects of a partial hepatectomy, patients receiving a liver transplant also face the risk that the body will reject the new liver tissue. Patients are given drugs to suppress the body’s immune system to prevent this from happening and must take these drugs for the rest of their lives. These drugs have potential risks and side effects of their own. Because the drugs are suppressing the body’s immune system, the patient is also at risk for serious infections.

In some cases, BMC offers laparoscopic and robotic surgeries to patients who are able to have their cancer resected. These minimally invasive procedures reduce the length of surgical incisions (cuts) and can lead to quicker recovery.

The surgeon makes a series of small incisions in the abdomen. The laparoscope (a long camera) is inserted into one of the incisions. Surgical instruments used to remove the tumor(s) are inserted into the others. The surgeon uses imaging techniques, such as CT, MRI, or ultrasound, and the real-time images produced by the laparoscope to guide the instruments in the removal of the tumor(s). When the part(s) of the liver containing the tumor(s) has been removed, the incisions are closed.

Your surgeon uses a computer-controlled device that moves, positions, and manipulates surgical tools based on his or her movements. He or she sits at the computer console with a monitor and the camera provides a three-dimensional view of your chest that is magnified 10 times greater than a person's normal vision. The surgeon's hands control the robotic arms to perform the procedure.

Interventional therapy uses localized treatments, such as ablation and embolization, to destroy the cancer without surgically removing it.

Tumor ablation is an image-guided, minimally invasive treatment used to destroy cancer cells. In tumor ablation, a physician inserts a specially equipped needle (probe) into the tumor or tumors guided by computed tomography (CT). Once the probe is in place, energy is transmitted through it and into the tumor.

There are several types of ablation, including:

Radiofrequency ablation (RFA) is a cancer treatment in which radiofrequency energy—derived from electric and magnetic energy—is sent by means of a narrow probe that is placed in the center of a lung tumor. Surgical incisions are not required, and the probes are placed into tumors using CT scan to guide the physician. RFA is a newer method of treating lung cancer, as well as cancers of the liver, kidney, and bone. RFA can target and kill cancerous cells sparing healthy tissues that are close to the cancer. Systemic treatments such as chemotherapy and certain types of radiation are absorbed into both healthy and diseased tissue, whereas RFA is delivered directly into a tumor.

In which radio waves heat the probe to kill the cancer cells.

Percutaneous ethanol injection uses ethanol, a type of alcohol, to destroy cancer cells. The physician guides the ethanol directly into the tumor using ultrasound. Generally, this procedure only requires local anesthesia. If the patient has multiple tumors, it may require general anesthesia.

Serious complications resulting from ablations are rare. Potential risks and side effects include abdominal pain, bleeding in the chest or abdomen, fever, and liver infection.

Embolization cuts off the tumor’s blood supply by clogging or cutting off the hepatic artery. The tumor cannot grow without its blood supply, and parts of it may die.

TACE injects chemotherapy coated beads directly into a tumor while also blocking off its blood supply. This allows a high dose of chemotherapy drugs to concentrate at the tumor site for a longer period of time while having little effect on the rest of the body.

Radioembolization inserts radioactive beads into the artery to deliver a small dose of radiation directly to the tumor(s).

Portal vein embolization takes advantage of the liver’s unique ability to undergo hypertrophy, or “regrowth” in a controlled fashion, after a portion of it has been deprived of part of its blood supply. Surgeons at BMC may utilize this technique prior to surgery, as it allows for the removal of large tumorous sections of the liver that would otherwise be inoperable.

Potential risks and side effects for embolization include abdominal pain, fever, nausea, infection in the liver, blood clots in the liver, and swelling in the gallbladder.

CyberKnife delivers highly targeted beams of radiation directly into tumors, in a pain-free, non-surgical way. Guided by specialized imaging software, we can track and continually adjust treatment at any point in the body, and without the need for the head frames and other equipment that are needed for some other forms of radiosurgery.

External beam radiation therapy is one of the most common types of radiation for cancer treatment. Radiation comes from a machine outside the body and delivers radiation to a specific location inside the body.

Stereotactic body radiation therapy directs multiple beams of energy at the tumor from different angles. The radiation oncologist is able to deliver higher doses of radiation to the tumor and minimize damage to surrounding healthy tissue.